Today is the last day of our current exhibition, Dislocation. I can’t thank my talented artists enough for such a powerful and beautiful show. In case you hadn’t seen Priya’s work, I wanted to make sure you had that chance.

Over the last four years I have had the pleasure of representing the very talented Priya Kambli. I first saw the work, Color Falls Down, when she submitted to the gallery’s New Directions exhibition in 2008. George Slade was our juror that year, and she was one of 13 artists out of 300 he selected to be on the walls that January. I was enthralled with the story, the compositions, and the creativity of how Priya tells her story. Her portfolio won the Critical Mass prize in 2008 for Color Falls Down and she was able to have a book produced through Photolucida, with the talented George Slade writing the foreword. In expanding the idea of cultural and emotional relationships, she has started a new series, Kitchen Gods, again attempting to connect to heritage, family and distance, both emotional and physical.

Priya was born and raised in India and moved to the United States at the age of 18, carrying her entire life in one suitcase weighing about 20 lbs. She began her artistic career in the States, and her work has always been informed by her experience as a migrant.

A graduate of the University of Louisiana, Lafayette, where she earned a Bachelor of Fine Arts in 1997, Kambli holds an M.F.A. from the University of Houston. Her monograph, Color Falls Down, was published in 2010. Kambli is a Professor of Art at Truman State University where she teaches Photography and Foundations. She lives in Kirksville, Missouri.

About Color Falls Down –

My photographs visually express the notion of transience and split cultural identity caused by the act of migration.

I have been viewing this issue through the lens of my own personal history and cultural journey from India to the United States. I moved to the US at the age of 18, carrying my entire life in one suitcase weighing about 20 lbs. This journey left me feeling disconnected — unable to anchor myself in any particular cultural framework. I have therefore formed a hybrid identity, a patching together of two cultures within one person.

In my work I explore absence, loss and genealogy through the use of my own family snapshots. These personal artifacts are recontextualized alongside fragmented images and staged imagery to reveal the correlations between generations, cultures and memory.

Color Falls Down – Muma, Baba, Sona and Me

One of my most startling early childhood memories is of seeing one of my father’s painstakingly composed family photographs pierced by my mother. She cut holes in them so as to completely obliterate her own face while not harming the image of my sister and myself beside her. Even as a child I was aware that this act was quite significant – but what it signified was beyond my ability to decipher. As an adult I continue to be disturbed by these artifacts, which not only encompass the photographer’s hand but also the subject’s fingerprints. Even though her incisions have a violent quality to them, as an image-maker I am aesthetically drawn by the physical mark, its presence and its careful placement.

These marred artifacts will form a reference point and inspiration for the series Kitchen Gods.  In my work I labor to maintain my parents the way Indian housewives do their kitchen deities. I also strive to connect the generations, my ancestors and my children, who have been separated by death and migration. Like my mother, I alter these photographs to modify the stories they tell. 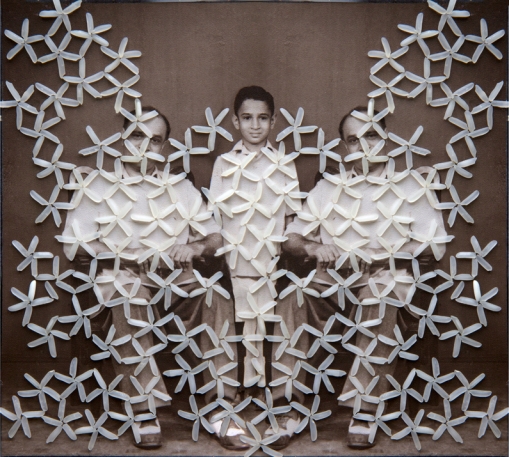