Jose Saldaña wears the traditional dress of the Charreada, or Mexican rodeo, while astride his colt Chapulín in the front yard of his home in Lost Hills. Jose, 25-years-old when this photo was made, works in the oil fields outside of Lost Hills and supports his aunt, uncles, sister, brother, two nieces, and a nephew. On his days off Jose practices the equestrian and lariat events and regularly competes with a team at Charreadas in the Central Valley and Los Angeles. For Jose, keeping horses and training them for Charreada is a way for him to stay connected to his Mexican cultural heritage. 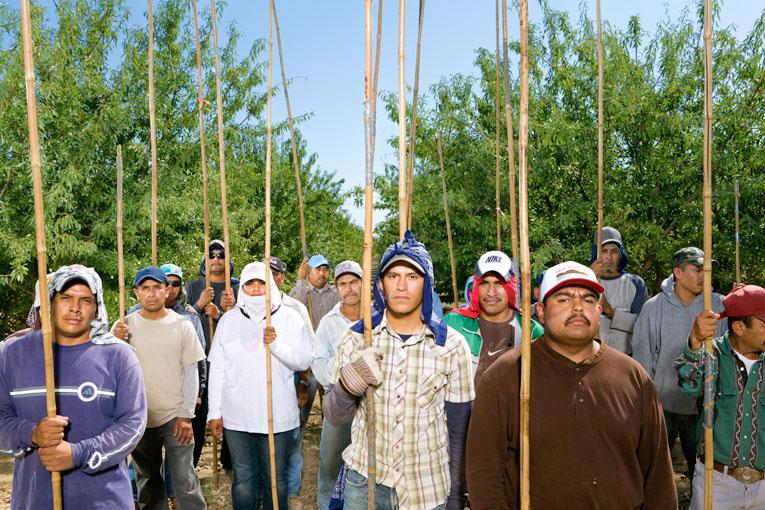 A crew of almond ‘polers’ stand in front of an orchard during the annual harvest outside of Lost Hills. For two months every fall, fleets of tractors harvest almonds by shaking the trees so vigorously that all but a few nuts fall
instantly to the ground. Those that remain are knocked out of the trees manually by men and women using bamboo pikes. The amount of hand labor necessary is staggering: California counted over 700,000 acres of nut-bearing trees in 2010.

About the Lost Hills Project –

Today Lost Hills is the same place where a new group of migrants have come to wring survival from the soil in the midst of economic crisis. They are Mexican, and Mexican-American, and in this photo essay of their work, family life, leisure, and physical surroundings, there are strong echoes of the Great Depression in their Great Recession experience. By focusing on Lost Hills today, the viewer sees a universal American story all too-common since the economic crash of 2008: the search for an American Dream in the midst of a contracted economy. What compounds the situation for these people is that as they seek out their own dreams with dignity and pluck, they also face racial prejudice and often, especially for the undocumented among them, systemic marginalization.
I’ve been drawn to photograph the people of Lost Hills because I’m interested in the duality of their position – both as outsiders, shut out of the system in which they work, and as simultaneously emblematic of the American experience.

Sam Comen photographs in places that are salient in the American collective consciousness, creating portrait series in conversation with the sites’ established historical narratives. He brings the toolset of commercial photography to these sites, showing his subjects in flattering light and from heroic angles, portraying
the residents as everyday icons.
In 2008 his Newsweek-assigned portrait series Watts Votes Obama documented Obama’s supporters on election day in the L.A. neighborhood synonymous with the racial tension in America. The series won multiple awards of excellence. In 2009, he began work on his Lost Hills series, which documents a small California community of Latino farmworkers struggling to create a new American Dream during The Great Recession. In 2010 he was awarded a Santa Fe Center for Photography grant to continue shooting in Lost Hills – the series is still ongoing,
and has been widely published and recognized. To produce 2012’s Central Avenue: A Community Album, Comen collected family photos from residents of the Los Angeles neighborhood known not only as the home of West Coast Jazz and civil rights progressivism in L.A., but also the site of economic despair and blight exemplified by devastating riots there in 1965 and 1992. Engaging with that dual narrative portrayed in the archival snapshots,
Comen made a new series of portraits there in March of 2012, and presented both sets of photos together in two large-scale exhibitions held in that same neighborhood on the eve of the 20th anniversary of the 1992 L.A. riots. The exhibitions activated discussion, stoked enthusiasm, and brought the local community and the wider L.A. arts community together in celebration and future visioning of Central Avenue.
Comen has received awards for his essays from The Santa Fe Center for Photography, Photo Lucida, and The Lucie Foundation. His commercial clients include Esquire, Details, The Wall Street Journal, Fortune, and Rolling Stone, and his photos have been honored in American Photo 26 and 28, The Photo District News Photo Annual in 2008 and 2010, and he’s twice been nominated for the PDN 30. Comen has exhibited both locally in L.A., across the U.S., and internationally, and internationally.