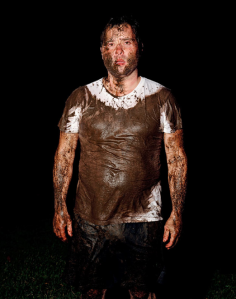 Jesse Burke’s photographs evoke a deep lushness with images of velvet black darkness, blankets of pine needles, blood, love, and sadness. He photographs the natural world around him as well as the men who are a part of his life, whether family members or friends, to explore the vulnerability of masculinity. He is drawn to moments where a rupture or wound is physically, emotionally, or metaphorically inflicted. He employs concepts such as male bonding and peer influence, masculine rites and rituals, and man’s connectedness to nature in order to expose these instances.

Jesse is an instructor at Rhode Island School of Design where he received his MFA in Photography. His work has been exhibited in New York, Tokyo, Milan, Stockholm, Madrid, Miami, Los Angeles, Seattle, Tucson, Providence, Ottawa, Boston. Jesse was the 2008 recipient of the Rhode Island State Council on the Arts Aaron Siskind Fellowship. His monograph Intertidal was recently published by Decode Books. He is represented by ClampArt in NYC and Platform Gallery in on the west coast.