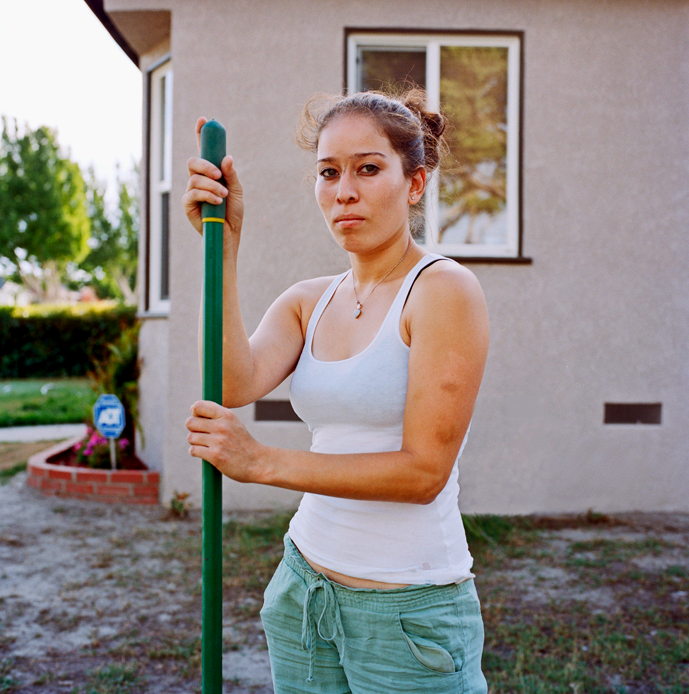 Tom Johnson is passionate about his town. Lakewood, California. It is his deep connection to Lakewood that comes through the lens as he exposes us to what could be an overlooked, undervalued part of the American Experience.

I first glimpsed this work in 2010 in Critical Mass. What makes these images memorable is in the reflection of his lens, exposing his commitment to find out what makes Lakewood so special to him. Johnson gives us as viewers a glimpse into a history and memory raising up an area that, just outside one of the most visible cities in the world, Los Angeles, might never be seen.

Portraits from “Lakewood, a Photographic Journal of a Sacred American Suburb.”

For nearly ten years I have been photographing the people of my suburb.  The residents of Lakewood – a modest enclave in the southeast section of Los Angeles County – are generally conservative, middle class, and consider being normal an attribute.  Most of them don’t see foreign films or visit museums, and they often ask, “What kind of camera is that?” when they see my Hasselblad (yes, I shoot film).

Initially when I met someone from Lakewood, who I believed would make for a provocative portrait, I would set-up a shoot. However, this method never seemed to work.  In preparation, they would create an emotional façade that would hide who they were.  I found I had more success when I approached them in the midst of their day-to-day existence and asked if I may take their photograph.  Only then could I capture whom, at that moment they were, before they could think to conceal themselves. Of course many declined this unusual request from a stranger, or some of the images I made did not work because the personalities would or could not reveal themselves.

In return, my portraits do not aim for the cliché or mock those who dwell in suburbia.  And even though I may see the world differently than those I photograph, I understand and respect them for how vigorously they strive to maintain their toehold on the American dream.  However, my portraits are not benign; not only do they illustrate a sampling of America’s middle-class, they express the hopes and anxiety’s of this shrinking demographic.

For nearly two decades Tom M Johnson has been commissioned by a variety of journals to photograph the most established and provocative artists, performers, and intellectuals inhabiting Los Angeles, such as Frank Gehry, Tom Ford, Bill Maher, and Jared Diamond.  However, it was 9/11 and its aftermath that compelled him to delve deeper into subject matter and to tune his focus upon long-term concepts. Tom’s first project, “Lakewood” returned him to the streets and neighborhoods of the suburb where he was raised in search of visuals and memories of his boyhood.  His next endeavor brought him back to where he lived and romanced as a young man, Paris, the city that awakened his senses, and inspired him to become a photographer.   There, he rode the Paris metro to each of its 29 ends to photograph a different part of Paris, one unseen by most Americans as well as his Parisian friends.  Tom now lives in Lakewood with his wife and two finches and is in the process of working on a book of his Lakewood photographs.