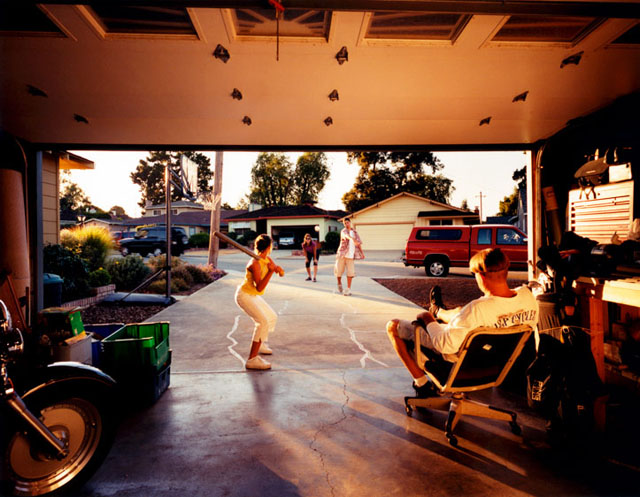 Taking a meaningful portrait, in my opinion, is really difficult. That connection is so fleeting and as a photographer, connection to the subject is critical to the success in capturing that moment, that emotion. Beth Yarnelle Edwards has the ability to make the moment effortless and still insightful. We want to know who these people are, be a participant in their world. Her compositions, lighting and the intensity of the connection brings us back over and over, each image telling us a story. I found this work during my 2009 jurying of Critical Mass, and have been following her since.

Sometimes, I’m so interested in what’s going on with people in their homes that I want to know what’s in the closet or under the bed. In my photographs I aspire to tell the viewer not just about what can be seen, but also about things that are hidden and locked away…

Because I’m fascinated with people’s relationships between themselves, their personal spaces, and their possessions, I began a project in 1997 in Silicon Valley, where I was living at the time. Suburban Dreams led to exhibitions and publications in Europe, which in turn generated invitations to create new images in different countries. I now have series from France, Spain, Holland, Germany and Iceland. There are more than one hundred images in the international series.

For my California project, I began with friends and neighbors, but quickly I found myself photographing households several degrees removed (i.e. relatives of a friend of a neighbor). Abroad, I’ve met my subjects in a variety of ways ranging from sign-up sheets at a museum to newspaper articles to contacts from local arts organizations. But as always, initial contacts have yielded new referrals.

I begin with a preview visit, during which I introduce myself and interview potential subjects, asking many open-ended questions about their lives and then listening carefully to the answers while observing everything I can. When a concept emerges which seems to resonate for them as well as for me, I suggest it for the image we’ll create together.

I seek out intersections of the mythic and mundane. As I attempt to reveal some basic truth about my subjects, I’m attracted to the peculiar or surprising. This can take many forms, ranging from humor to visual quirkiness to a sense of universality, or even the uncanny.

Intrigued by the way people fashion living spaces to reflect or even establish their identity, San Francisco-based photographer Beth Yarnelle Edwards collaborates with her subjects to create scenes of domestic daily life. She has photographed extensively in Silicon Valley and has also worked by invitation in France, Spain, Holland, Germany and Iceland.

Edwards’ photographs have been exhibited and published extensively in the US and Europe with solo museum exhibitions at Château d’Eau in Toulouse, France and the Musée de la Photographie à Charleroi, Belgium. The winner of the Santa Fe Center for Photography Project Competition as well as the Ruttenberg and Gerbode Foundation awards, her work resides in numerous public collections, including the San Francisco Museum of Modern Art, the Los Angeles Museum of Contemporary Art, and the Museum of Fine Arts in Houston. Edwards’ first monograph, Suburban Dreams, will be published in spring 2011, by Kehrer Verlag in Heidelberg, Germany.

Exhibition and other news:

Beth Yarnelle Edwards’ work is featured in Twenty at the Hereford Photography Festival in the UK, 29 October through 27 November; and If These Walls Could Talk at Polyester Gallery in Omaha (with Holly Andres and Dorothy O’Connor). The Iceland Series will be featured in a solo show at the Museum of Photography in Reykjavik, Iceland, June 23 – August 16, 2011.