I was excited to meet Kevin in Santa Fe at the Santa Fe reviews.
I had heard about his work, Camp Home and seen his 20×200 from Jen Bekman Projects. Couldn’t wait to put a face to the work I had so admired.

Camp Home was everything I hoped it would be, and Fast Food was as clever and creative as everything Kevin touches.

Camp Home is a story of family, of the past and of the present. History at its most gut wrenching. Japanese American families taken from their homes, placed at Tule Lake (among other locations). But this story is not just about the wrongs we committed. Its about how we have managed to give additional families a new life, and how we moved on from that horrible moment. Kevin bridges the gaps, connecting us to the residents now.
Kevin’s words –
“In the series Camp Home, I document the reuse of buildings from the Tule Lake internment camp, where my father’s family was sent during World War ll. The barracks used to house Japanese and Japanese American internees were dispersed throughout the neighboring landscape following the war. Adapted into homes and outbuildings by returning veterans under a homesteading movement, many still stand on land surrounding the original camp site. In photographing these buildings, I explore family history, both my own and that of the current building owners – this is physical space where our unique American histories come together. Because photography was forbidden by internees, very few photographs of homelife were made by the families themselves. So my pictures act as evidence, though many years later, of a domestication rarely recorded during the initial life of the structures.”

Fast Food. Hot Topic. Current event. We are all looking at what we ingest now in many ways. Epidemic obesity, health issues, cancer, ecoli, and the list continues.
Kevin looks at what we leave behind, buildings abandoned, as disposable as the containers we use to consume. My dream is to showcase Susana Raab’s color work and the stark contrast of Kevin’s black & white images, really looking at what we have become. and maybe where we go from here. 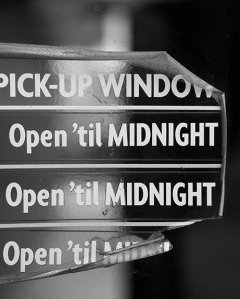